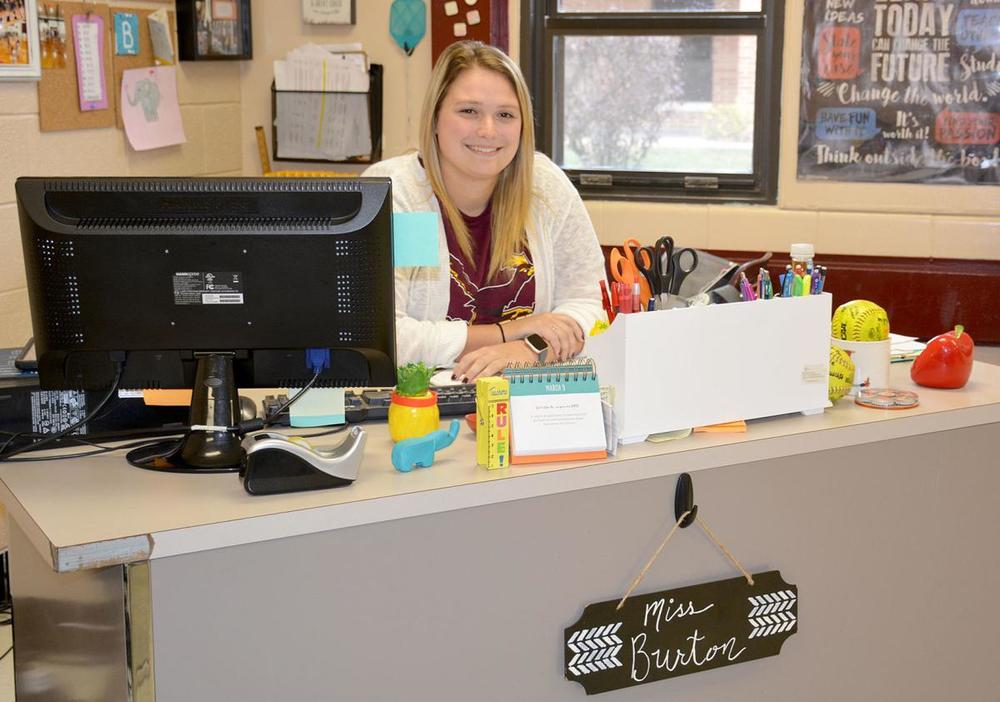 DIETERICH — Students walking into the classroom of Strasburg native Lindsay Burton at Dieterich Junior-Senior High School are met with colorful math posters, comfortable desks and a bright white board.

As they approach Burton's desk, they'll notice small elephant trinkets, photos and even a basket shaped like the 23-year-old math teacher's favorite animal. For Burton, however, these elephants symbolize more than just her favorite animal to see at the zoo.

Burton, a former basketball player during her days at Greenville University, fell in love with elephants through her assistant junior varsity coach at the university. She said the coach wore an elephant print dress to all the team's games, which often resulted in a win.

"When I started coaching with her, she was the JV head coach, and I was her assistant coach. I was like, 'Man, I need to get something elephant.' Ever since then, that's kind of been my strength symbol," Burton said. "I just think it's a symbol of strength for me, and I put them up because when people ask, I want to tell them it means you can be strong."

The young teacher and Dieterich girls junior high basketball coach has, in recent years, been forced to summon much of her own strength to fight through a heart condition which sidelined her for half of her basketball career at Greenville. As a junior at the university, Burton was diagnosed with trigeminy, which causes her heart to skip every third beat.

Burton recalled being short of breath during basketball practices, and even walking up and down stairs caused her to vomit. The lifelong athlete should have been at her healthiest as a college basketball player, but little did she know, these seemingly minor inconveniences to her health would make a big impact on her life.

"I remember my junior year in November — it was November 11 — we were supposed to have one of our first JV games, and I went to the doctor that day, and she was like no more sports, which crushed me because I've grown up since junior high playing sports. That is what I lived and breathed. I loved sports," Burton said.

Through the remainder of her junior year of college, Burton said she began feeling down because she could not play the sport she's loved all her life. Instead, she was forced to watch from the sidelines and was even put on bed rest at one point.

Burton was then offered a position as the student assistant coach for the college's junior varsity team in her senior year. In that season, she coached along side the former JV assistant coach Burton played under.

Along with her dream of becoming a teacher, Burton said she always wanted to come back to her high school alma mater, Stew-Stras, and coach there. The assistant coaching gig at Greenville was Burton's first taste of coaching, but she admitted it was a challenge for her.

"Before that happened, I really didn't know if I would be a good basketball coach because it's so much different playing than coaching," Burton said. "Playing, you just have got to know your position, and that's all you have to know. Coaching, you've got to see everything on the team, so I was super nervous."

After graduating, Burton received five offers to teach at five different schools, one of those being in Shelbyville. Burton said she was strongly considering teaching at Shelbyville because that's where she played high school basketball, as Stew-Stras didn't have a high school girls basketball program at the time.

The offer from Dieterich Junior-Senior High School was the very last offer Burton received. Along with that offer to teach came an offer to coach junior high girls basketball.

Burton, who was student teaching at the time, consulted her student teaching mentor about the offer because Burton was hesitant about taking on the coaching role. Her mentor gave her advice she still carries with her today, saying if Burton stays one step ahead of the players, she will be an excellent coach.

Along with that advice and a calling she just couldn't shake, Burton accepted the teaching and coaching job at Dieterich.

"Honestly, I felt called to come to Dieterich," Burton said. "I don't think I could have picked a better community to come into my first year because they're so welcoming."

Faith has always played an important role in Burton's life, especially when it came to choosing Dieterich and also when she got sick. Through Burton's struggles with trigemny, there have been many moments Burton said she found herself asking God why.

It took Burton a few years to find her 'why' until she discovered it after taking the job at Dieterich.

Burton said its through teaching and especially coaching that she has found the answers to her 'why' questions.

"That's my 'why' because now I get the opportunity to do this. I get to coach," Burton said. "Every day when I coach, I try to remind the girls this is not going to be a forever thing, so you need to value every time that you're on this floor."

There is one player in particular that is also one of Burton's 'why's'. After her first parent meeting for her first season last year, Burton said the player's parent spoke with her and informed her that the player suffered a stroke when she was in sixth grade.

The mom explained that her daughter's future health was undetermined, but basketball was her favorite sport. That's when Burton knew God brought her to Dieterich to help this player.

"When her mom told me that I was like, this is why. I experienced that. Obviously, not at that age, but I can mentor to her. I can attest to that, and so it's super cool just being able to help her through that process," Burton said. "I really do feel like God placed me here partly for that reason because it happened to me, now, look you can still find joy in everything."

Finding that joy is something Burton said she tries to instill in her players. That joy could come from serving others.

Thankful Thursdays have become a tradition for the Dieterich junior high girls basketball team thanks to Burton. The team uses that day every week to give back to their school, community or one another.

Burton said she works with her players and her junior high and high school math students on tapping into their self-confidence. In math, Burton said kids are often intimidated by the subject, so she aims to make it less scary and a lot more fun.

Coming into her coaching role, Burton said at first, she had a team that would get down on themselves after losing. Burton spent her first year boosting the girls up and helping them learn the fundamentals of basketball so they can feel good about themselves, win or lose.

Those strategies have been working for Burton's seventh and eighth grade teams, too. This year, both squads have a winning record, and recently, her seventh grade team won second place in the National Trail Conference championship.

"We're a lot better this season, so it's fun to see not only their skills getting better, but they believe in themselves a lot more," Burton said.

Believing they can push through any obstacle is something Burton can relate to her own health struggles. Last year in August, she had a catheter ablation on her heart valve and is currently being treated for psoriatic arthritis and pre-clinical lupus.

Despite her health struggles, Burton said she finds joy in the little things in life, and she hopes her players and students do, too.