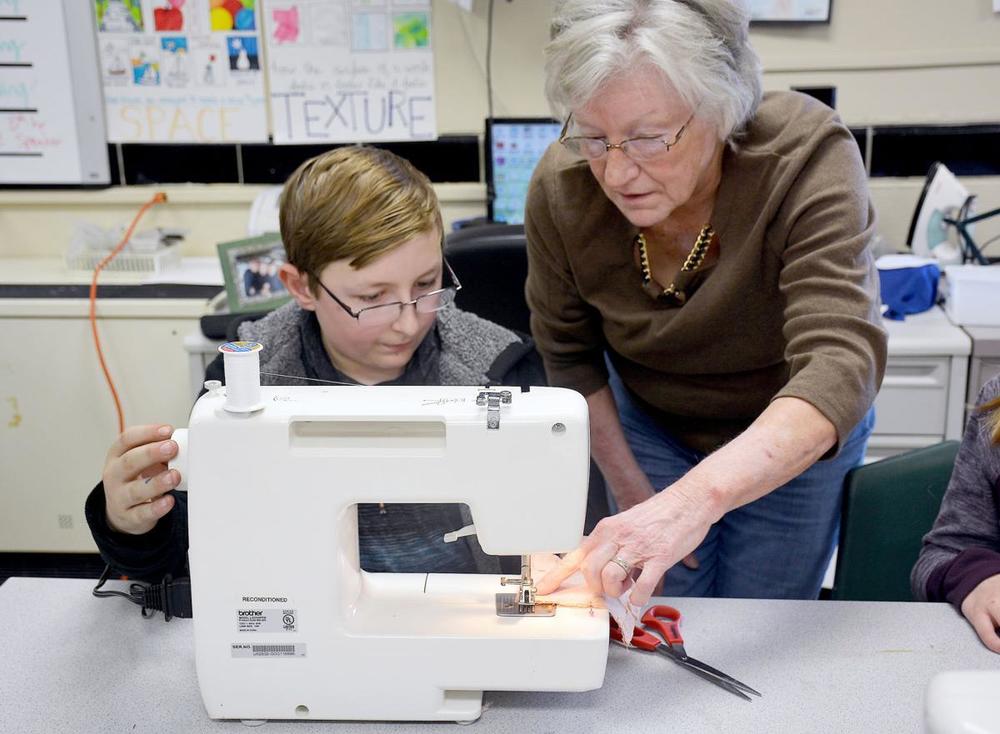 DIETERICH — Stacey Zerrusen inherited 12 sewing machines for her art room at Dieterich Elementary School. So she decided to teach students how to sew.

This is the second year Zerrusen has been teaching sewing in her art room with the help of volunteers.

Most of the supplies Zerrusen utilizes in her sewing classes is donated, including fabric and stuffing.

Zerrusen decided to teach sewing after the district cut home economics classes a few years ago. She has found a majority of her students love to sew and oftentimes the male students like to sew more than the female students.

“Once they learn the basics, I give them free rein to create,” Zerrusen said.

Some of the projects created by students so far include baby blankets, a quilt and a T-shirt. The high school students are making stuffed animals designed by kindergarten students.

On Tuesday, sixth-graders tried their hand at using a sewing machine in Zerrusen’s class, learning how to thread, hem and create a basic pocket. They also learned how to hand sew a button.

Bailey Brummer was one of the sixth grade students using a sewing machine for the first time.

One of the projects she hopes to work on is making a cover.

Addison Miller had also sat at the sewing machine for the first time Tuesday.

Zach Reyes had never done any type of sewing before, except by hand, which he learned last year.

“Working on the machine makes it a lot easier,” he said. “I look forward to making a pillow.”

“I think it’s an art you can have fun with without being stressed,” he said.

Clayton Klinger, who was working on threading a needle to sew on the pocket he made, said sewing is “tricky, but it’s fun.”

“It’s great to see the kids faces when they accomplish it,” she said.

“It’s fun seeing the kids get the concept of it,” she said.