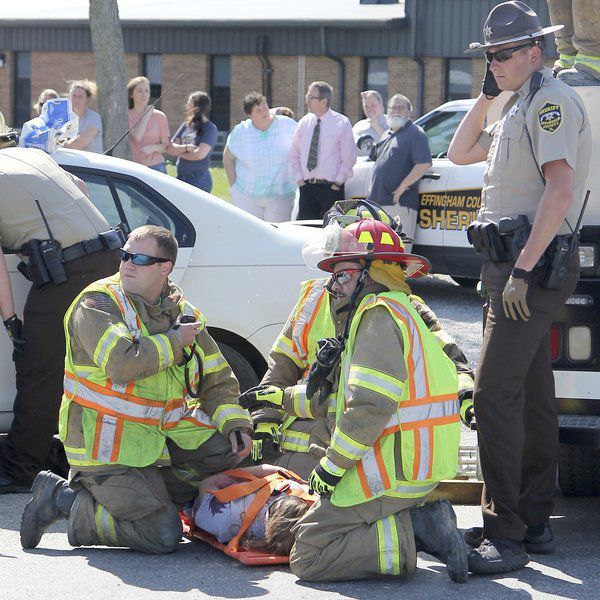 DIETERICH — Ahead of prom, Dieterich students were reminded Tuesday of the risks of driving while drunk or distracted. Officials staged a mock accident to demonstrate the deadly consequences of bad choices.

The scene was set as students arrived, with members of the drama club playing the roles.

It was arranged so that Seth Bohnhoff, a junior, was driving drunk with Rowdy Ruholl, a senior, and Jennifer Robards in his car. Kaitlyn Bloemer was in the opposite car.

Student Rowdy Ruholl was ejected through the windshield and "killed" in the accident, notably not wearing a seat belt.

Students watched as firefighters from Dieterich, Teutopolis and Montrose worked to extract the occupants, which including cutting the entire roof off the car Bloemer was trapped in.

Bohnhoff went through the entire DUI routine, including the gaze test and walking along a line.

He was cuffed and placed into a squad car by Deputy Jeremy Kyle and left to sit as his classmates filed by toward the auditorium, where they listened to speakers.

"I hope this scares them into not being in a situation like this," said Bohnhoff.

He said it's cured him of any desire to drink and drive.

The event was organized by Dieterich Fire Chief Ross Martin, who said it's been more than 20 years since there's been such a demonstration at the school.

He's responded to actual accidents involving the death of young people and wanted to prevent it happening again.

"This is probably the closest to a real thing you will get in a controlled environment," Martin said, adding the only difference would be a real scene would be more chaotic.

Effingham County Deputy Eric Higgs is the school resource officer and served as the narrator for the event.

He said in an interview that the use of mobile devices has become as much of a threat as drinking in accidents.

One of the major concerns he had is students wearing their seat belts.

Fully 68 percent of teen passengers who die in a crash are not wearing their seat belts, according to the National Organizations for Youth Safety. The group also notes that 58 percent of teens involved in crashes are distracted.

Higgs pointed out that distraction could be a digital device, but could also be passengers in the vehicle.

Brian Gerth of Abbott Ambulance said such mock accidents are important for making clear such accidents do occur.

"If it's not real, that's a story, that's a myth, and it's not going to happen to them," Gerth said.

Additionally, it's a traumatizing event for the families, friends and first responders who are involved, he said.

Graham Milldrum can be reached at 217-347-7151 ext. 131 or by email at graham.milldrum@effinghamdailynews.com