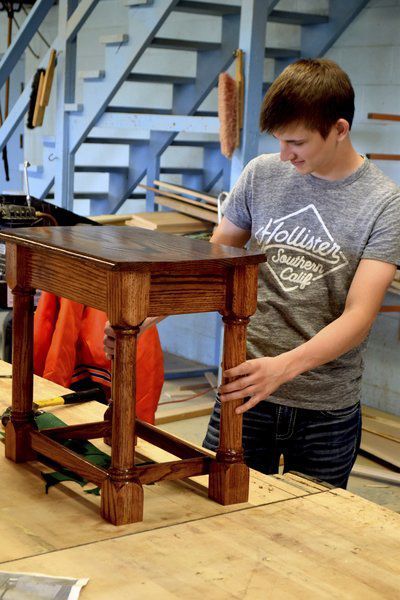 Kip Johnson is among a special class of teachers that, he says, is dwindling.

“This is a craft that is disappearing,” Johnson said. “Schools are going to loose this program soon if they are not careful.”

Johnson said there aren’t as many trained teachers who can teach the craft of cabinetmaking and woodworking. However, in Dieterich, the program remains popular.

“My first year I taught this I had three kids in class,” Johnson said about when he began to teach the class 30 years ago. “And a few years back, I had to have two classes.”

“There has been a year or two we had to turn kids away,” Johnson added.

Johnson says the kids in his class don’t fit one particular stereotype.

“I have kids in here that have been valedictorians, salutatorians, some of the best basketball players. Half these kids are on a ball team,” he said.

Johnson plans to retire after next year.

“I’m going to miss this class,” Johnson said. “Some of these kids I’ve had for awhile.”

“These are not kits. This stuff is handmade from a pile of lumber,” Johnson said about his classes’ projects.

“It all had to be custom made. I had to make the plans myself,” he said.

“Last year I built the headboard and foot board I wanted with two night stands,” Mellendorf said. “This year, I was like, I might as well complete the set. So, I made a chest of drawers and the dresser.”

The pieces of furniture he made for his bedroom suite include places to store guns.

“There is a gun that can go into everything he’s made,” Johnson said about Mellendorf’s furniture design.

“I have a hunting background,” Mellendorf added.

Mellendorf estimates he has invested nearly $1,800 into the project. Johnson believes Mellendorf could sell the bedroom set for between $3,000 and $5,000.

Ryan Radloff created a curio cabinet with two sliding doors that can hold five guns each.

Last year Radloff made a hat rack out of cherry wood that included a top that could be opened to hold a Browning A5 shotgun and a three-drawer dresser for his mom.

DHS Senior Callaway Campton created a trophy case for this year’s project that has two glass display areas on each end of the cabinet for displaying his sports jerseys. Campton plans to use his trophy case in his bedroom.

Senior Briar Schmitt made a U.S. Flag cabinet with stripes made of strips of oak and walnut his teacher says should bring close to $300 retail. The cabinet can hold an AR-15 rifle.

Twin seniors Brandon Manhke and Brett Manhke have created several projects over the past two years.

Brandon made a dresser for his younger sister and last year created a functioning cobbler’s bench coffee table. Brett created a TV stand with matching end tables featuring legs made of logs.

Senior Mitchell Esker has been one of Johnson’s students since he was a freshman. He created a huge project.

“It was a gun cabinet. But it was so large that it had to come apart in three pieces to be able to move it through a door,” Johnson said about Esker’s corner cabinet that took two years to complete. “It had two rotating gun racks.”

Johnson says Esker could probably sell his project, which has been sitting in a shed, for $5,000.

When asked if he wanted to sell the cabinet, Esker said “I’ve been thinking about it. It won’t fit in the house.”

See link below for more pictures.