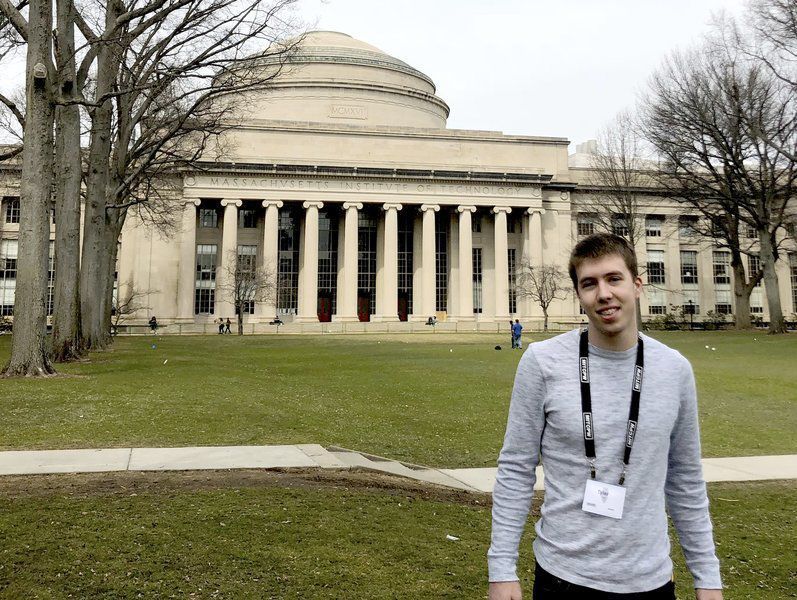 From the cornfield to Cambridge: Dieterich teen headed to MIT

On Dec. 14, 2017, life changed for the Higgs family. However, the whole family didn’t know it right away.

It was at that point, Tyler Higgs, a recent Dieterich High School graduate, found out he was going to be trading in his rural Midwestern lifestyle of working on his family farm in Dieterich to a more complex city lifestyle at one of America’s most prestigious universities, not just anyone has the chance to attend.

Higgs was one of nearly 1,500 out of 21,700 who applied from around the world to be admitted on intellectual merit to Massachusetts Institute of Technology.

Higgs recalled the day he discovered he had been accepted. He finished his basketball practice that afternoon and was taking part in a blood drive when he made the decision to check the MIT website to see if he made the cut.

“It didn’t know what to expect,” Higgs said. “I really didn’t know if I was going to get in or not and I did.”

“My coach was helping to supervise the blood drive,” Higgs said about Dieterich High School Basketball Coach Josh Krumwiede “I called him over to get an extra set of eyes to make sure I got in.”

“I was waiting for him to call. We knew he was supposed to find out that day,” Tyler’s Father, Eric Higgs, said. “Finally, I’m getting ready to call him when my phone rings.”

After Eric Higgs asked his son if his day went all right and if practice was good, Tyler's reply was simply "yeah."

“I finally asked him if he heard anything about MIT,” Eric Higgs said. “He said 'Oh yeah, I got in.'”

“I felt like he could get in,” Tami Higgs added.

In applying for MIT, Tyler Higgs had to go through additional testing for MIT in math and physics not required by most universities, not to mention having higher SAT scores.

Tyler Higgs credits his junior high teacher Ray Hinterscher for his interest in mathematics that helped lead him on his journey to MIT. Hinterscher challenged Higgs by giving him high school-level Algebra I and Algebra II problems to solve.

“It was really hard,” Higgs said. “But, he always gave me challenge problems.”

As Higgs developed his mathematics prowess, he started looking for a university specializing in physics and math. He decided to go straight to the top and try for the No. 1 school specializing in those two fields — MIT.

His parents took him to a meeting in St. Louis where Tyler Higgs learned about the level of difficulty he would face if he decided to attend MIT.

“It really got me excited about MIT specifically,” Higgs said about the meeting. “MIT seemed like a really good culture.”

The selling point for Higgs was the fact students didn’t compete against each other. They collaborate with each other to determine a solution to a complex problem.

Higgs got a sample of MIT collaboration when was accepted into a six-week Summer Science Program in New Mexico last year to explore astrophysics during an MIT-affiliated program.

The program was held at the New Mexico Institute of Technology and very similar to the MIT culture with students collaborating together. His study group examined the orbital elements of asteroid “Jason” as part of their research.

The final findings the students logged during their research was published, according to Higgs.

Higgs said over 1,000 students applied to get into the Summer Science Program and only 98 were invited to participate.

“And some of those kids go to superschools,” Tami Higgs said.

For now, Tyler Higgs will enjoy his first summer after graduation working at the Effingham Country Club, mowing lawns and helping out on his grandfather’s farm.

But come August Tyler Higgs will moving to a place that also somewhat feels like home as he discovered during a visit last month when the family saw huge white boards throughout the campus.

Higgs has a white board in his rural Dieterich bedroom he uses for math calculations and problem solving.

“I told him you've met your people. It's your tribe,” said Tami Higgs.