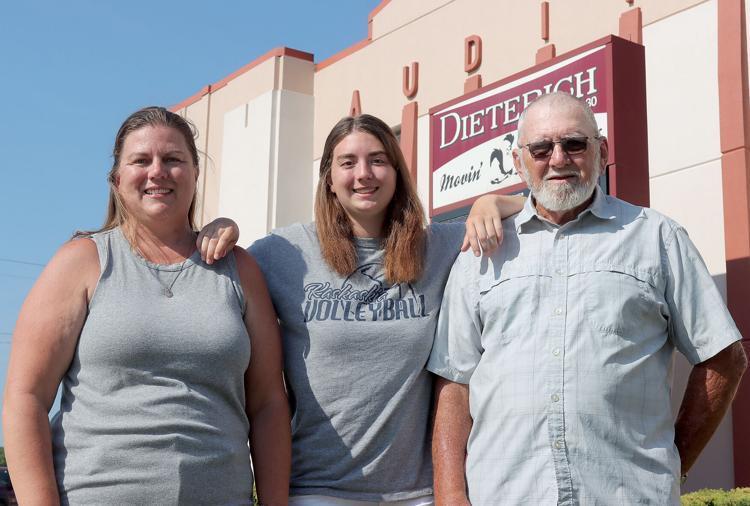 Emily Hall isn’t the only one in her family set to play athletics collegiately.

The future Kaskaskia College volleyball player and former Dieterich Movin’ Maroon is a three-generation athlete, with her mom, Lana, and her grandfather, Larry Flach, also playing sports in college.

“It’s a great honor,” said Emily about continuing her volleyball career at the next level. “I’m thrilled to keep going, playing, and doing what I love. I know I can push myself and make myself a better person by surrounding myself with people who have the same interests and are as kind-hearted as me.

“I feel special because I’m different from everyone else, and I know that I’ve worked hard because the other coaches don’t go to smaller schools to look for players; they go to the bigger ones.”

Despite the rivalry, Emily said she is looking forward to paving her path but added one crucial thing she plans to take away from her time wearing the Maroon and Gold.

“I’m going to take my hard work ethic because I feel like people around here are very hard-workers,” Emily said. “We get the job done, no matter what it takes — I think that will be the one big thing I will take away.

“The other thing I’ll probably take are the good memories and knowledge to go live and have fun.”

Having a parent and a grandparent who played at the next level is an advantage, too.

Lana said that the one thing her daughter will need to remember is that playing in college brings a different level of intensity that Emily may have never seen before.

“You’ll practice twice a day for two weeks until school starts. Then, when school starts, you’ll have at least one practice seven days a week, and it’s not just a 30-minute drive to the next town to get to that school; it’s a two-hour drive to the next college,” Lana said. “You’re going to see girls that are stronger, quicker, and can move the ball like there’s no tomorrow, but we tried to prepare her as best we could by putting her in travel ball so that way she could see the tougher competition and the girls that have the extra drive.”

Another factor is overcoming the traditional small-town stereotype of athletes not being able to match up to that of the likes of larger towns.

“Most of my teammates were from New Albany, Indiana, and Louisville, Kentucky, among others, so they were from large schools. They were all amazed at how many kids I had in my graduating class and that I got signed up to play sports,” Lana said.

When Emily steps foot on the court for the first time with her teammates, she will also be trying to do something that her mother and grandfather couldn’t do: try and finish out both years of college sports.

Lana said that she suffered an injury during her freshman year of volleyball that sidelined her for the rest of her athletics career.

As for Flach, after completing his freshman year on the first-ever Olney Central College men’s basketball team, he went to serve in the military, forgoing his sophomore campaign on the hardwood.

“He went to school to be a mortician at Olney Central College and was on the first men’s basketball team. He got injured in preseason training and was sidelined for most of the season,” Lana said. “Then, after his first year of school, he came home to work on the farm, and he got one of those nice, pretty letters from Uncle Sam, so he joined the U.S. Army.”