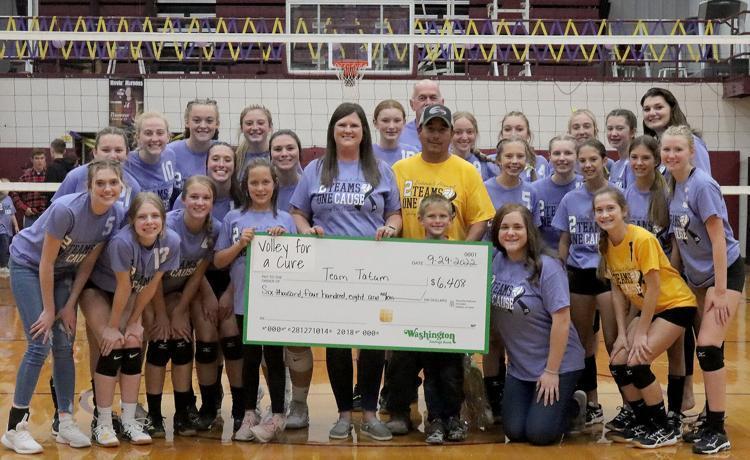 Janelle and Travis Garcia were blown away by the generosity of the Dieterich and Altamont communities last Thursday.

The two Effingham County towns raised $6,408 toward Janelle and Travis’ son Tatum’s cancer treatment, receiving a check following the Movin’ Maroons and Lady Indians’ volleyball match. Both teams also honored Tatum by donning purple and yellow shirts that read “2 Teams, 1 Cause” instead of wearing the traditional Dieterich and Altamont jerseys.

Dieterich head volleyball coach Nicole Flood said, “We could not have done it without both communities. It’s awesome to see them come together, and it’s awesome to know that we live in a community that can do this for everyone. It wasn’t about who won or lost this game; I was glad we could come together to help the Garcia’s out.

“It was a lot of preparation, and I was stressed, but it was well worth it.”

Janelle added, “This night is overwhelming; this community support is overwhelming. How everybody comes together to support people in time of need, we’re lucky to be in the community we live in; you never think you’re going to be the one on this end of things. You support your fellow community members, and one day it’s you.”

Tatum, a three-year-old, is battling neuroblastoma cancer, which he was diagnosed with in April.

According to the Mayo Clinic website, neuroblastoma cancer develops from immature nerve cells around the body and commonly affects children ages five and younger.

Flood — a cousin to the Garcia family — said that Tatum still has a long road ahead of him.

“He’s been going to St. Louis to get treatments, so we’re just hoping for the best and trying to help the family any way we can, and that’s not just us; that’s the entire community,” Flood said. “[Janelle and Travis] are the kind of people that would do anything for you and not ask for anything in return.

“I know it’s hard for them, and I want to be there in the best way to help them.”